Recently, breast implants have been linked to a type of T-cell lymphoma called Breast Implant-Associated Anaplastic Large Cell Lymphoma (BIA-ALCL). This is not a form of breast cancer, but rather an uncommon type of immune cell malignance similar to Hodgkin’s lymphoma, a solid cancer of white blood cells.

The cancerous tissue developing in breast implant recipients is mostly found around the scar, concomitant with the accumulation of fluid causing a sensation of discomfort. This lymphoma can be treated with surgical removal if caught early, however, some women have died from this disease. The use of breast implants for cosmetic augmentation and reconstruction after mastectomy in breast cancer or for transgender women, are among the most frequent applications. But the surgery or more precisely the material used is not without risks.

Recently, breast implants have been linked to a type of T-cell lymphoma called Breast Implant Associated Anaplastic Large Cell Lymphoma (BIA-ALCL). This is not a form of breast cancer, but rather an uncommon type of immune cell malignance similar to Hodgkin’s lymphoma, a solid cancer of white blood cells.

The cancerous tissue developing in breast implant recipients is mostly found around the scar, concomitant with the accumulation of fluid causing a sensation of discomfort. This lymphoma can be treated with surgical removal, if caught early, however some women have died from this disease.

One hypothesis leading to carcinogenic changes around the implants suggests that the generalised inflammation triggered by the foreign material could raise the level of inflammatory mediators, thus, contributing to the amplification of a growth stimulus specifically targeting T-lymphocytes. Augmented proliferation of these cells may involve genetic mutations transforming normal cells into cancer cells. 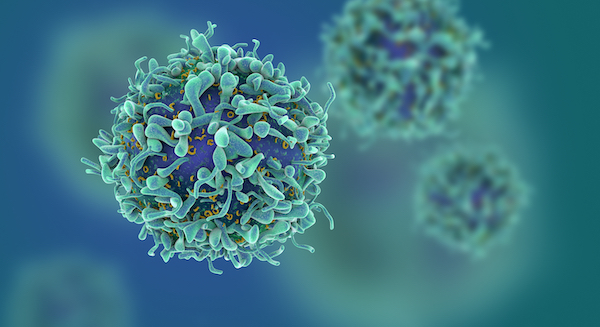 
In the last few years, the link between the breast implant and lymphoma has alarmed bodies such as the World Health Organisation, the Federal Drug Association (FDA) in the US and the Therapeutic Goods Administration (TGA) in Australia.

The exact incidence of ALCL among breast implant recipients is not known. The Mayo clinic reported being from one in 1,000 to one in 30,000 people with breast implants in the US, where approximately 300,000 women receive breast implants every year. Although cancer remains rare, the FDA reported 660 people with BIA-ALCL, of whom nine had died from the disease.

The causality between the material used for the implants and the development of lymphomas has not been determined or confirmed (see below evidence from recent studies). As for now, in March 2019 the FDA has released a statement that the organisation will not ban the use of these implants but continue to monitor the incidence of BIA-ALCL and instruct surgeons to provide informed material to patients prior to surgery. In addition, they should warn patients to report any type of discomfort, swelling of the breast or lymph nodes at the earliest time. 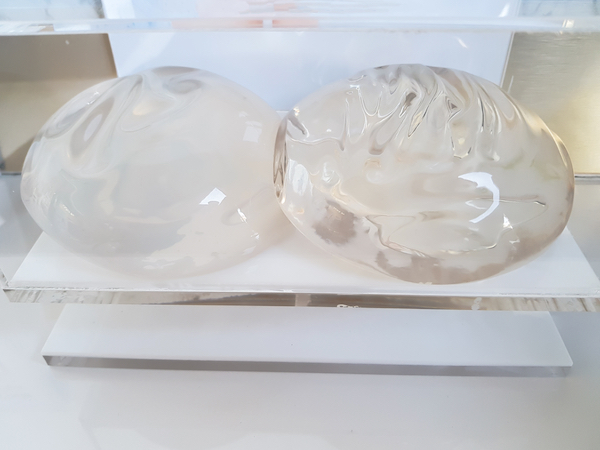 Generally, experts have described the incidence of BIA-ALCL as being between 1-in-1,000 and 1-in-10,000, occurring three to eight years following implant surgery. In May 2019, the TGA reported of 78 patients with confirmed BIA-ALCL in Australian women including four deaths, adding that between 13,000 to 17,000 procedures are performed every year. Thus far in Australia, there are no reports of BIA-ALCL in women receiving smooth breast implants but only in those with textured or polyurethane implants. There is no certainty regarding the type or brand of textured implants carrying greater risks for cancer. Therefore, with this limited knowledge, it is difficult to predict which women may develop breast implant-associated BIA-ALCL. 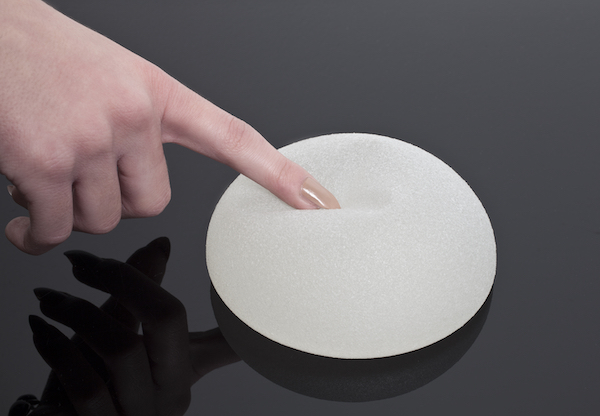 Breast implant with a textured surface

Breast implants are generally made of either textured or smooth shells containing saline or silicone gel filling. In Australia, textured implants of varying roughness are used in 82% of operations. Some plastic surgeons believe that textured implants reduce the formation of scar tissue and to be the preferred type of implant by patients due to their versatility in shape and superior stiffness. However, research has shown that textured implants facilitate bacterial infection, and possibly cancer and implant failure. Usually, complications from breast implants arise several years following surgery but can also last without problems for 20 to 30 years.

Among the general complications of breast implant surgery are capsular contracture, implant rupture, asymmetry, pain, tissue atrophy, calcium deposits, infection, toxic shock, haematoma, inflammation, lymphoedema, nipple sensation changes, bruising, skin rash and wrinkling. The arise of systemic symptoms, as a reaction to the foreign material used in the implants, can lead to breast implant illness elicited by a systemic immune response. Such patients report chronic fatigue, cognitive issues, joint and muscle pain, all of which are resolved upon removal of the implants.

Conclusions from a recent study from Australia analysing three implant types have confirmed that the highest risk for BIA-ALCL in Australia and New Zealand is found in textured implants with a grade 4 surface. These materials have the highest surface area and roughness and seem to potentiate the growth of Gram-positive and Gram-negative bacteria. The grade 4 surface (Silimed polyurethane) also shows significantly higher rates of bacterial growth and T-cell activation in both animal models and human series of capsular contracture.

Another published report from Australia and New Zealand showed that the number of BIA-ALCL continues to rise, with 26 new cases being diagnosed over 16 months in 2017-2018, totalling 81 cases, which lead to a 47% increase over this period. When looking at specific implant materials, they saw the risk increased for Silimed polyurethane (23.4 times higher) compared with Biocell, which remained at (16.5 times higher), compared with Siltex implants.

These combined studies conclude that the exponential rise in BIA-ALCL over the last decade can be elucidated by the increased use of specific implant subtypes, whereby high-textured high-surface-area implants (grade 4 surface) carry the highest risk of the disease.

In the future, the ongoing collection of data from breast implant surgeries through comprehensive registries will help define more clearly the epidemiology of BIA-ALCL, its characteristics and ways to prevent it.

The content and images found on any educational material released by Lex Medicus and Lex Medicus Publishing are protected by copyright.